E & J Gallo Winery’s Consumer Wine Trends Survey asked where, when and how Americans are enjoying wine. From the press release:

MODESTO, Calif., Dec. 9, 2014 /PRNewswire/ — E. & J. Gallo Winery, the world’s largest family-owned winery, recently commissioned its inaugural Gallo Consumer Wine Trends Survey to capture the current state of Americans’ wine drinking attitudes and behaviors. The survey posed a series of questions to 1,001 frequent wine drinkers in the US, which resulted in a better understanding of exactly where, when and how Americans are enjoying wine. 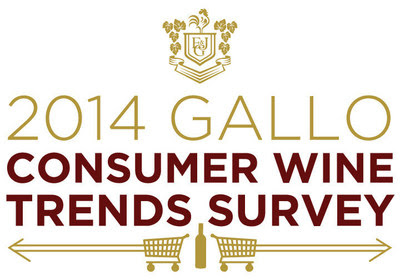 To view the multimedia assets associated with this release, please click: http://www.multivu.com/players/English/7379251-e-and-j-gallo-winery-consumer-wine-trends-survey-captures-americans-drinking-attitudes-behaviors/

“We are committed to capturing an annual snapshot to help us continue producing wines that meet America’s evolving tastes and reflect today’s growing number of different wine occasions,” said Vice President of Marketing and third generation Gallo family member Stephanie Gallo. “For over 80 years, Gallo has been committed to excellence, and in today’s wine market that means we must remain at the forefront of innovation by crafting wines that reflect wine behavior at the dinner table and beyond.”

As a whole, the survey told us that Americans are enjoying wine more often than ever before by bringing it into dining, entertaining and even the most casual experiences – all while demonstrating an eagerness to experiment with various flavors and formats. These changes are part of an exciting transition in the wine industry as wineries focus more on catering to customers rather than asking them to conform.

EVERYONE IS NOW A WINE CRITIC
Among frequent wine drinkers, those in the younger 25-40 age group are increasingly turning to social media to talk about and discover new wines, with more than half (54 percent) participating in conversations about wine on social media and nearly half (49 percent) posting and sharing wine photos. Every wine drinker now possesses a platform to be both critic and influencer through the seemingly limitless reach of this medium.  In this same respect, they are using the internet as a trusted resource for wine knowledge, with nearly half (49 percent) of younger drinkers saying that they respect bloggers’ opinions.

SWEET AND BUBBLY ARE IN STYLE
When asked about specific varietals they typically purchase, Moscato and Champagne were popular choices among the younger set. In fact, frequent wine drinkers under 40 are more than twice as likely to purchase Moscato (22 percent) when compared to 26 other popular varietals (11 percent on average) as well as when compared to older wine drinkers – 22 percent of younger drinkers versus 10 percent of older.

These younger wine drinkers are also shedding the preconception that sparkling wines are just for special occasions. Many reported that they are popping bottles for everyday moments and nearly all of them (93 percent) would pair sparkling wine and Champagne with the foods they’re enjoying.

WINE DRINKERS ARE MIXING IT UP
Generational differences were on prominent display with younger drinkers between the ages of 25 and 40 seemingly unbound by traditions that have often governed wine. Unlike previous generations, they are experimenting with different ways to enjoy wine and are unapologetic about their choices. Of those surveyed:

CONVENIENCE IS KEY
Though there were many notable differences between the younger and older age groups, the survey also revealed key thoughts and behaviors shared by almost all frequent wine drinkers. Of these, the most noticeable common ground was convenience. Recognizing that this has become a key factor for many consumers, wine aisles have seen dramatic transitions across the country – from the traditional ‘sea of glass’ to a place of much more varied offerings.

Between premium and value box wine, tetra paks, screw tops, and portable 187ml bottles, there are many different and convenient ways to enjoy wine today. In fact, retailers are beginning to dedicate entire sections of the wine aisle to single-serve packaging or other convenient options such as box. Box wine is particularly more relevant in today’s wine culture than ever before, with 58 percent of wine drinkers indicating that they have purchased it.

WHAT’S ON THE INSIDE COUNTS
While two-thirds (66 percent) of American wine drinkers admit to buying a wine based on its label, it may not be enough to make a lasting impact. Unsurprisingly, 76 percent say that taste is the most important factor that will keep them coming back for more.  The varietals that continue to enjoy the most popularity were Merlot, Cabertnet Sauvignon, Chardonnay, Pinot Noir and Pinot Grigio, which rounded out the top five choices of survey respondents.

The 2014 Gallo Consumer Wine Trends Survey was conducted by Libran Research & Consulting (www.libranresearch.com) among 1,001 nationally representative U.S. wine- drinking1 adults ranging in age from 25 to 64.  The survey was conducted using an email invitation and online survey between the dates of June 20th and June 24th, 2014. More information about E. &. J. Gallo Winery can be found at www.gallo.com and additional findings from the 2014 Gallo Consumer Wine Trends Survey are available at www.GalloWineTrends.com.