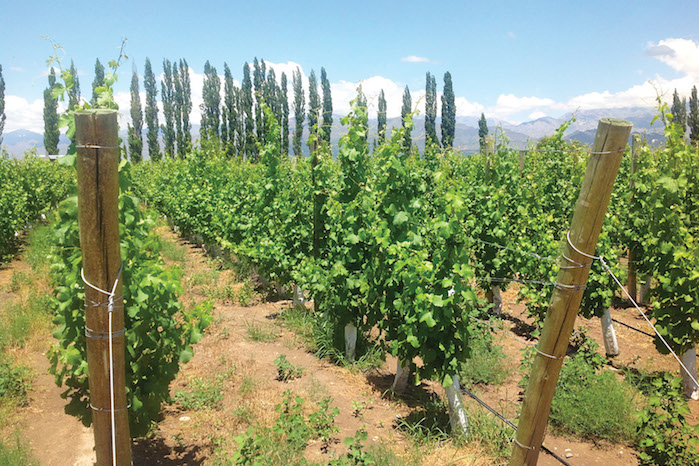 After decades of explosive growth fueled by fierce competition for low-end market share, South America’s wine industry is maturing into a new phase. Argentina and Chile are now major players, ranking fifth and sixth respectively among the world’s top wine producers. With prices steadily rising in step with improvements in quality, wines from both nations are muscling their way into premium tiers currently dominated by California, France and Italy.

South America’s third and fourth largest producers, Brazil and Uruguay, may lag far behind, but both are following the same South American playbook that has proven so successful for their neighbors: leveraging fruit-friendly terrain and low-cost agriculture to gain their own recognition abroad.

Wine-savvy visitors to South America quickly realize that no continent has geography and climate more conducive to grape-growing. The valleys and plateaus that frame the Andes feature cloud-free skies in the growing season that reduce the need for pest control or disease prevention. Factor in easy access to affordable irrigation and modest land and labor costs, and it becomes clear why other countries find it hard to compete in terms of wine quality for the dollar.

With the 2016 Olympics kicking off this summer, all eyes will once again be on a major international sporting event in Brazil, but this time with a lot more American teams and American fans. This provides retailers with the perfect opportunity to upgrade their South American selection to reflect the growing diversity and exceptional quality to be found.

This is particularly true for Chile and Argentina: the classics like Argentine Malbec and Chilean Cabernet Sauvignon are hitting their stride and exploring flavor profiles that are distinctively South American, just as ambitious new appellations and unexpected grape varieties are broadening the style options on both flanks of the Andes. And for those reluctant to add a new country to their product mix, 2016 provides the best possible rationale for opening the door to Brazil and neighboring Uruguay.

Climbing Out of the Bargain Bin

South American wines earned their current market share by delivering unexpectedly high quality for surprisingly low prices, particularly in Bordelais reds like Cabernet Sauvignon and Malbec. Moving forward, value will certainly remain central to the South American identity, but rather than viewing Chilean and Argentine wines as a “less than $10” compromise for lesser occasions, wine drinkers are increasingly seeing these countries as sources of greater mileage for each dollar spent on finer wines at price points from $15 to $30 and beyond.

“In our South American offerings, we are seeing the most success in the premium tier,” says Dennis Kreps, a founding partner of Quintessential Wines, which represents only family-owned wineries. “Malbecs from proven sub-zones, like San Rafael, Maipú and Uco Valley may cost more than Mendoza bottlings, but they offer exceptional value. On the Chilean side, interest in cooler-climate appellations and premium whites is growing.”

To get a sense of what the future holds in Chile and Argentina, it’s helpful to have some historical context; both countries seduced Americans with great wines at low prices, but in different ways and for different reasons. When Chilean wines burst onto the scene in the nineties, it was not by chance, but the result of a coordinated national initiative to increase wine exports. Chile was already a fresh fruit powerhouse, and classic French grapes had been cultivated since the mid-nineteenth century. However, a small population and low per-capita consumption made exports the only viable path to growth for Chile’s wine industry.

Government programs encouraged a wave of winery consolidation and pushed larger companies to take their wines abroad. A thirsty global market responded, and in the last 20 years, Chile’s planted vineyard area and production have more than doubled to meet demand. Exports skyrocketed from 27% of total production in 1994 to a staggering 79% in 2014, of which one-third comes to the US.

In some years, up to half of Chile’s total exports have been in bulk, generating very little profit, but now a new, concerted effort is underway to raise Chile’s profile as a fine wine producer by exporting more premium bottled wines. Doing so is within its means, and will reduce dependence on fickle currency markets. Chile’s total bulk exports dropped by 21% in 2014, according to the USDA’s Foreign Agriculture Service, but total export volume, value and FOB prices per liter of non-bulk wine continue to increase steadily year on year.

By contrast, the Argentine Malbec boom that arrived with the new millennium was not planned, but rather the direct result of an economic catastrophe. Though Argentina had long been a larger producer of wine than Chile, higher population and much higher per capita consumption gave vintners few incentives to sell overseas. However, the recession that caused Argentina to default on its national debt in 2001 left wineries with no choice but to sell their exceptional wines abroad at low cost.

Just as Argentine wines were peaking, international markets were spooked again recently when Argentina’s notoriously volatile economy faltered. But 2016 has brought increasing economic stability under a new government, to the relief of Argentina’s wine producers.

“President Macri’s policies are taking Argentina in a new direction,” says Roberto Luka, founder of Mendoza’s Finca Sophenia and a former president of Wines of Argentina. “We are seeing the return of international investors interested in making good wines in the $12 to $20 range and higher. Many of the larger wine groups that have a stake in Argentina’s wine trade are reinvesting. They know our premium wines are competitive and can see a sustainable future here.”

As both Chile and Argentina climb into premium price points for different reasons, bargain hunters can find new South American horizons in Brazil and Uruguay. Brazilian exports to date have largely featured fruity whites like sparkling Moscato. But there is great potential in premium Chardonnay, Merlot and Malbec from regions like Rio Grande do Sul and Santa Catarina.

Uruguay’s Basque heritage makes its wines ideal for the adventurous Millennials looking for a new South American fix. Uruguay’s top grape is the thick-skinned Tannat, the vine of fiercely tannic Madiran. With the New World’s characteristically riper flavors thanks to ample sunshine, the best are made in zones like Canelones and Maldonado that surround the capital of Montevideo, an area that also makes snappy Sauvignon Blanc.

One reason South American vintners can command higher prices is because so many are pioneering distinctive styles that have their own unique sensibilities, rather than simply catering to a monolithic international palate. Argentine Malbecs now come in a broader range of textures from a dazzling array of terroirs. Prestige appellations now extend well beyond the bounds of Mendoza, where most Argentine wine is made.

From Salta’s high-altitude Cafayate on the 27th parallel in the north, known for the elegance of its Malbecs, to Patagonia’s breezy Pinot Noir haven of Río Negro in the south on the 39th parallel, Argentina’s remarkable span is unrivalled on other continents. Malbec and Torrontés are being joined on the shelf by balanced and flavorful interpretations of Syrah, Cabernet Franc and even Semillón that give these French grapes a distinctive Argentine twist.

Across the Andes in Chile, a similar pattern is unfolding as a new generation of viticulturists rediscover workhorse varieties like Cinsault, Carignane and Grenache that were widely planted in the early 20th century. Even Pais, the original Mission grape introduced by the Spanish conquistadores, is making news, as some of Chile’s leading producers seek to rehabilitate the image of this much-maligned lightweight red grape and make it a point of Chilean pride. Many ancient Pais vineyards remain in the southernmost valleys, and have proven capable of making exceptional wines, like the 2012 Reserva de Pueblo Pais from Spanish-owned Miguel Torres.

There is no better example of how South America has come into its own fine wine adulthood than the turnabout wine drinkers can taste in Cabernet Sauvignon and red Bordeaux blends from Chile. Vintners here are increasingly resisting the Americanized fashion for hyper-ripeness, choosing to pick earlier to make brighter wines closer to the historical origins of French Bordeaux. Harvesting sooner preserves the grape’s all-important natural acidity, as well as fruit flavors that taste fresher and less dessert-like. The resulting wines have plenty of flavor and food-friendly complexity, but feel lighter and drier on the palate.

At Santa Carolina in Santiago, dubbed Wine Enthusiast’s New World Winery of the Year in 2015, the new, top-of-the-line Cabernet Sauvignon ‘Luis Pereira’ clocks in at a mere 12.8% alcohol. The wine is inspired by the great Cabernets the winery made in the 1950’s, which still drink beautifully today.

“We use only pre-phylloxera material and must harvest a month earlier than the current norm to make a wine like this,” explains chief winemaker Andres Caballero. “It would have been much easier to present a big, rich, 14.5% alcohol wine. This wine, I will have to teach.” Luckily, now that South America has earned its stripes, the wine world is now ready to learn what these remarkable regions have to say. BD

Author and sommelier Marnie Old is one of the country’s leading wine experts. Formerly the director of wine studies for Manhattan’s esteemed French Culinary Institute, she is best known for her visually engaging books published by DK – the award-winning Wine: A Tasting Course and He Said Beer, She Said Wine.